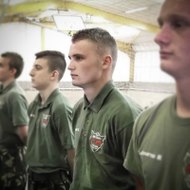 A former student at a MPCT Isle of Wight has made history by becoming the first person to receive a prestigious accolade.

Marine Jack Duer of 43 Commando’s O-Squadron was selected by senior officers within the Corps as Royal Marine of the Year for most embodying what it means to be an elite commando.

And his success is shared by the Military Preparation College where his army career began.

MPCT Isle of Wight centre manager Brian Richardson MBE said Jack joined the college “wanting to develop himself physically, mentally and learn what being in the Armed Forces is all about and his determination, confidence and sheer ‘can do’ attitude was clearly evident throughout his time on course.

“He is an outstanding young man and I am so proud of all his achievements over the past few years, both at the Isle of Wight MPCT and the Royal Marines.”

He went on to become an apprentice at the College, working alongside the staff and helping other students with their workload, in August 2013 before leaving to join the Royal Marines the following year.

Jack, originally from west London but now living in Hampshire when not on duty protecting the UK’s nuclear deterrent at Clyde Naval Base in Scotland, said, “being a Royal Marine made me who I am today. It bettered me in all aspects. I’d recommend it.

“I didn’t have much going for me, I didn’t do much at school. At least now I’ve accomplished something. It’s been so worth it.”

And Huw Lewis MBE, its founder and CEO, said , “ he is incredibly proud of Jack’s huge personal achievement.”

“Being the first ever Royal Marine of the Year demonstrates a tremendous commitment from Jack but also reflects the impact MPCT staff are making on young people’s lives across the United Kingdom.

“This is an excellent example of our core values and is a fitting reward to all staff across MPCT at the end of an extremely challenging year for us all.”