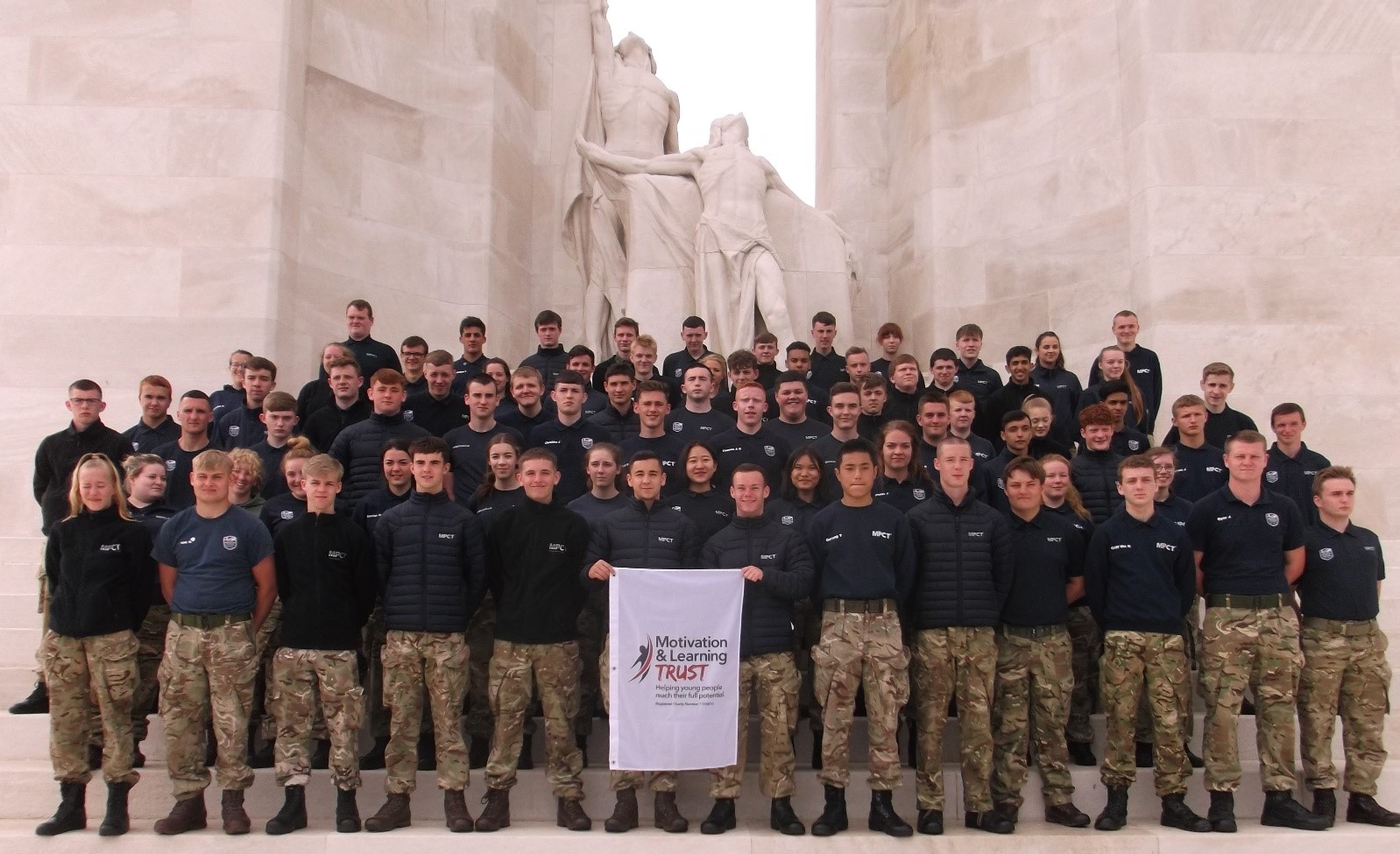 In May of this year 85 MPCT Learners and staff from a variety of colleges in England and Wales took part in this excellent battlefield tour to France and Belgium to visit the scene of the fighting on “The Western Front” of World War one. Fierce fighting took place in this area between the outbreak of war in 1914 and the signing of the Armistice in November of 1918.
Two coaches were to undertake the journey, one starting the long journey from Bangor in North Wales and another from Swansea in South Wales. Collecting the learners en-route as they travelled through England and Wales towards the Channel Tunnel in Folkestone where they boarded the Shuttle to begin the adventure. For some of the Learners this was their first experience of overseas travel. Having collected the 2 professional guides from CGT Battlefields Limited on the way, we were all set to undertake a varied and very busy programme of visits to sites and museums in the region.
After a long and tiring journey, we arrived in Albert (pronounced “Albair”) where we were to spend 2 nights while visiting sites in the region known as “The Somme”. This was the scene of fierce battles with German forces who had secured the high ground in 1914. The first day of the Battle of the Somme took place on 01 July 1916 and became known as the worst single day for those killed and wounded, in the history of the British Army.
After a welcome night’s sleep at the “Poppies” Hostel, the coaches set off on day two of our trip, moving around various sites, cemeteries and museums. Excellent commentary was provided at each stop by our two professional guides, John Wort and Brian Shaw.

CBG Battlefield’s Guide Brian Shaw setting the scene for the Learners of coach 1.
Many of the locations visited on the first full day will be familiar to readers and those with an interest in Military history. Mametz wood, where the 38th Welsh division fought with distinction; Newfoundland Park, now Canadian National territory, where the Newfoundland Regiment suffered horrendous losses; Lochnagar Crater, where hundreds of Germans were killed when a tunnel filled with explosives was detonated beneath them. These and other notable occurrences were outlined in detail by our guides.
The group also visited a German War Cemetery which, by comparison to the Commonwealth War Grave Commission sites, was a more sombre scene. The Learners saw that different countries remember their dead in different ways.

Learners at the Mametz Wood Memorial where the 38th Welsh Division fought with distinction. The wood can be seen in the background. In the foreground, staff prepare the wreath which was laid at each site.
Of particular note was the visit to the Thiepval Memorial to the missing. An extremely imposing memorial that lists the names of 73,000 souls who have no known grave. This had a particular impact on the Learners who were really surprised that so many of the heroes were never found in this awful conflict that took place over 100 years ago. They were to visit other memorials that contained thousands more of such names!

The Thiepval Memorial on The Somme, visited on Day 2 of the tour.
Day 3 of the tour began with visits to the Arras region. Of particular note was the visit to Vimy Ridge where both coaches came together to visit the imposing Canadian memorial which dominates the ridge. This was the area where many Canadians died in the ferocious and often hand-to-hand fighting.

Learners at the Canadian Memorial to the fighting on the Western Front at Vimy Ridge.
The day continued with the coaches moving North towards Belgium and our final destination for the day – Ypres and the Menin Gate memorial. Learners were scheduled to take part in the internationally renowned Last Post Ceremony held nightly with roads being closed off and visitors paying their respects to the fallen.
All the Learners and staff took part in the ceremony and nominated Learners laid wreaths from MPCT Colleges around the UK. It was a very moving event made especially poignant by the sounding of the Last Post by a fireman from the Ypres Fire Brigade. With the exception of the WW2 years, this has taken place every evening at 8 PM since the 1920’s. Hundreds of tourists took part in the ceremony and afterwards, Learners were given time to visit the town of Ypres. The guides had arranged for the local Belgian Chocolate shop to remain open so some mothers received a nice souvenir from their children on return.

Before laying wreaths, Learners ponder the names of thousands of Allied Soldiers who have no known grave and are listed here on the Menin Gate.

On the final day of the tour, both coaches, again visited the Menin Gate before visiting other renowned sites in the area. These included Hill 60, Vancouver Corner, and the Largest Commonwealth War Grave Cemetery at Tyne Cot. Worthy of note is the visit to the Welsh Dragon memorial on Pilkem Ridge, a key feature in the Battle for Passchendaele. This is to commemorate all the Welsh Soldiers Killed during WW1 and was dedicated by HRH Prince Charles last year during the 100th anniversary celebrations of the Battle of Passchendaele.

MLT Trustees Dave Morris and Manny Manfred accompanied the tour and here we see the final group photograph of Coach 1 before leaving Ypres.

Guide Brian Shaw outlining the events of the Battle of Passchendaele which took place in 1917. The base of the memorial is a Cromlech which in Wales is interpreted as a megalithic tomb consisting of a large flat stone laid on upright ones.
With the tour completed, both coaches departed for the Channel Tunnel to return to the UK. Morale was high though the Learners were tired and had much to think about. They had all been briefed to gain the necessary information to give presentations to other Learners on return. I am sure such presentations will be well received and will stimulate further interest in the second tour proposed for October of 2018.
On behalf of the Board of Trustees of the Motivation and Learning Trust, I would like to thank all of the MPCT Staff and Learners for an excellent tour. The Learners were well disciplined and attentive and the supervision from MPCT staff meant that there were no problems encountered.
The Motivation and Learning trust is proud to support MPCT Learners in providing specific educational opportunities, in line with their Aims and Charters.

Thank you Manny Manfred | Chair of Trustees | Motivation And Learning Trust for taking the time to record the trip in such great detail.