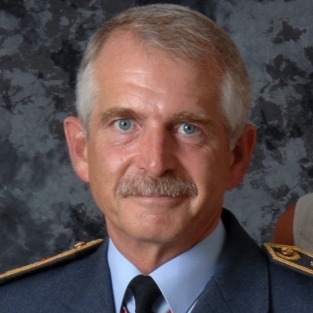 We are delighted to announce that Air Marshal Sir Dusty Miller KBE, has kindly agreed to become our Patron at MPCT.

The Patron who joined us most recently, Air Marshal Sir Dusty Miller KBE, joined the RAF in a most unusual way. Staying on at school after taking his O-levels was not really an option, so his Mother applied to the Royal Air Force in his name which resulted in him gaining a place as an RAF apprentice at the age of fifteen. The apprenticeship lasted for 2 years during which he gained two additional O-levels to add to the four he achieved at school, and qualified as an airframe fitter.

Determined to build a successful career in the RAF, but not necessarily in engineering, he was selected for commissioning and entry into flying training as soon as the apprenticeship was completed. The RAF had seen a glimmer of potential in him and spurred its development with their instruction and guidance. Looking back at this point in his life he realises how important it was to be encouraged to break out from the safety of familiar surroundings, try something different, and went on to establish a growing sense of achievement and self-worth. It was from this moment that he began to enjoy every second of his working life and believes his passion for youth development comes from, and is rooted in, his early experience of having been given a chance.

When asked for advice for our Learners, he explained that you should try everything you possibly can at least once, so long as it is legal, going on to explain that you should never turn down an opportunity to try something different simply through fear that you might not like it. You may well surprise yourself and come to learn to love it, whereupon working hard at it does not feel like work at all, and if you can earn sufficient money through the thing you now love, that is where your future, and great satisfaction, might lie. A sense of self-worth and self-confidence are crucial to any walk of life, and he believes it to be within everyone’s ability to develop both if given the right guidance and if they are prepared to put in some effort themselves.

After a career spanning over 40 years he retired from the RAF in January 2008 and now holds a commission as a flight lieutenant in the RAFVR(T). He is a Director of the Honourable Company of Gloucestershire, and is the Branch President of the Cheltenham Royal Air Forces Association, Vice-Patron of the RAF Halton Apprentices Association, Honorary President of the Tangmere Military Aviation Museum, Honorary President of the Gloucestershire Outward Bound Association, and Honorary President of 125 (Cheltenham) Squadron RAF Air Cadets. Finally, he is Patron of ‘fly2help’ based at Staverton, and is Patron and a volunteer skipper for ‘Turn to Starboard’, a sailing charity based in Falmouth supporting Armed Forces personnel affected by military operations. Most recently he has become a Patron for the Motivational Preparation College for Training.

Whilst the overriding majority of youngsters need little more than the encouragement and guidance of their parents to find their way to becoming happy, well-adjusted young adults, a substantial minority need a great deal more help and support to develop the self-confidence and motivation that enables them to spot and then seize the opportunities that lay all around.

From my own experiences as a boy, admittedly a long time ago, I am struck by the need to help youngsters navigate the periodically troubled waters that lead from childhood to adulthood. Since retiring after a full and rewarding career with the Royal Air Force I have taken on a number of volunteer roles most of which have an emphasis on youth and youth development.

Having witnessed at first hand the work of the MPCT, no single fibre of my being could refuse the generous invitation to become a Patron and I wholeheartedly and enthusiastically look forward to working with such a highly motivated, professional and caring team.”

We are delighted and honoured to have Air Marshal Sir Dusty Miller KBE as a patron and to be announcing his appointment in the year of the 21st anniversary of MPCT. It’s a fitting way for us to celebrate both the military connection, our commitment to a formal relationship with the RAF and the heritage of our organisation.

“Sir Dusty Miller’s Patronage is hugely appreciated. He has been a supporter of MPCT Gloucester for some time and it is an enormous honour that he has accepted the position of Patron.”