News & Events / Our Girls at the Army Training Centre, Pirbright 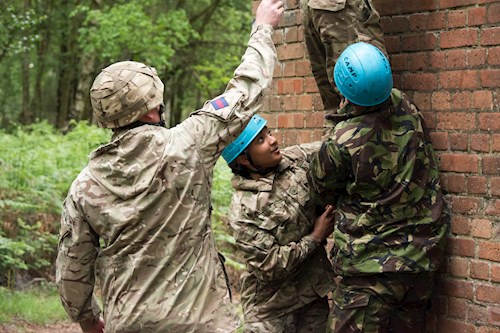 During a conversation with a colleague at the Military Preparation College, I found out that there was a possibility that the College wouldn’t be able to take any female students on a 5-day work experience military training exercise at the Army Training Centre, Pirbright because there was no female chaperone staff member available. I instantly offered to go.  As a woman, there was no way I would let our female students miss out. With combat roles in the Army opening up to women, I particularly felt that supporting our girls was a must. It didn’t matter to me that I had no military experience to offer, our students want nothing more than to join the Army and this opportunity would be invaluable to them.

A week later, I had an email from my colleague with a briefing document for “EXERCISE St GEORGES DRAGON– PIRBRIGHT 15-19 MAY 2017”.  I started to think that I may have made a mistake in offering to go. As the Marketing Manager at the Military Preparation College, I am based at our Head Office in Cardiff. I work in a bright office with air con, coffee on tap, laptops, tablets, mobile phones and internet connection.  I had never been to an Army base before and reading through the document I realised that the 15th-19th May would take me far away from my mod cons and would be in stark contrast to an average week at work – but then the Military Preparation College is not your average college!

The aim of the exercise was to help our students get an insight into, and prepare for, a career in the Armed Forces, as part of a work experience programme. The week included fitness assessments in line with the British Army’s physical selection standards, timed command tasks that involved our students being deployed onto ATC Pirbright’s training areas to carry out field craft exercises, navex tasks, assault course timed runs, and tactical exercises with troops in the field.

When I arrived at the training centre in the evening I was issued with a sleeping bag and shown to the female block before being introduced to our five female students. I was blown away by their energy, confidence, maturity and sassiness. They didn’t know each other before as they had come from five different Military Preparation College locations and had only met that day but they had come together so naturally, it was refreshing to see them stick together and getting on with each other.

It was my responsibility to inspect their block, make sure they got up on time and had lights out after 2230hrs in addition to providing general support throughout the week. I have to admit, I felt a bit guilty on the first morning when I inspected their room and found it to be in immaculate order and far tidier than my own room.  I clearly lacked the military training and standards our students had developed on the Military Preparation College course. This demonstrated just how much preparation our students had done on our college courses across the UK to prepare them for military careers. They already knew what was expected of them.

On the first day of the exercise all of our students took part in physical assessments that were run in line with the Army’s selection standards. This included a static lift, a 150m jerry can carry and a timed 1.5 mile run. As I watched the students give it their all I realised how fit they were. I would never have been able to pass those tests myself. The RG informed us that 90% of the Military Preparation College students on the exercise would have passed the physical selection process in line with the Army’s standards – this was amazing. It further reinforced how effective the physical training at the Military Preparation College had prepared our students as they do it every day at college. Our motto at the college is Benjamin Franklin’s quote:“by failing to prepare, you are preparing to fail” and this was really clear to see during the whole week – the College students were prepared for success.

This level of preparation, commitment and determination was clear to see throughout the whole week from all of the students. With their college Instructors (all ex-military) and the Coldstream Guards supporting and guiding them throughout the exercise, the students’ confidence continued to grow. Throughout the week, the Coldstreamers’ support, training and mentoring of the students and relationships with the Military Preparation College staff, the Coldstreamers demonstrated their motto flawlessly, they were Second to None.
Lt Col James Thurstan from the 1st Battalion Coldstream Guards also recognised the value of collaborating with the Military Preparation College to support their own recruitment needs:

“It was time and effort well spent at the MPC and worth the ‘opportunity cost’ so I am happy to continue to support.  We will be key to remain engaged – especially with those learners who have expressed 1st choice interest.”

Throughout the week I learnt a lot about the life of a soldier and my respect for the frontline British Army’s infantry grew ten-fold. I listened to war stories from my colleagues and the Coldstream Guards, witnessed how our students’ morale was kept so high despite having been in torrential rain for 12 hours. I learnt how to map read, put up a basha, take care of myself in the field and prepare food as well as gaining observation skills and cam & concealment techniques. These were all things I learnt for the first time. The students already knew these skills and techniques – this was an opportunity for them to put their skills and knowledge gained from the Military Preparation College course into practice in a safe, yet realistic military environment. 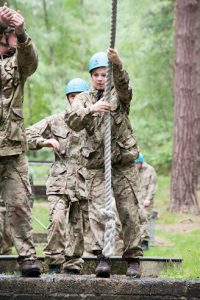 It was clear to see how much learning and development the students gained throughout the week, both physically and mentally. However, what stood out most to me was their desire to belong. During a video interview with the five female students I asked why they wanted to join the military. I expected them to tell me it was to travel, earn a decent salary and get career with development and progression opportunities – all things that a career in the military offers. They did give these reasons, but more than anything, they emphasised that they wanted to belong. 17-year-old Leah Gaffrey from our Farnborough Military Preparation College summed it up:

“It’s more of a question of why wouldn’t you want to join the Army. They’ve always got your back, ex-soldiers that I’ve spoken to have all said that when they leave their job role there’s always someone to go back to that will help you out.”

I could see that the students had identified what they wanted from their careers and from life. They wanted real experiences and real friends. These are not things that Facebook and Instagram give our young people today. It was so refreshing to see our students strive for these lifelong relationships and a place where they can belong.

I left ATC Pirbright on the Friday afternoon. I was absolutely shattered and I hadn’t taken part in half of the activities that the students completed. I had thoroughly enjoyed every moment of the exercise that week and I have already asked to be a female chaperone on all future exercises with the Army. I realised that to be a better role model to the female students I needed to be better prepared myself. If I was a teenager, I would definitely join the Military Preparation College to help me develop the physical and mental robustness that the students demonstrated.

At the Military Preparation College 22% of students are female. This is significantly higher than the Army’s 9%. The Military Preparation College is still keen to increase the number of female students on programme. Based on what I saw this week, I have every confidence that in the years to come we will see many more of the College’s female students join  the British Armed Forces as they pursue their military career ambitions. 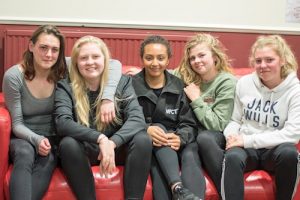